General information of the shrine 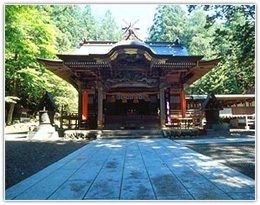 The deities enshrined at the shrine are recognized as kami to protect people from fire and other disasters. Over a million worshippers visit from all over the Kanto area each year. Prayers are given daily for the safety of one's family, prosperity in business, avoidance of fire and robbery, traffic safety, good fortune with money, and so on.

Today's shrine buildings consist of Honden (main sanctuary), Heiden (hall of offerings), and Haiden (hall of worship) and are constructed in the Gongen-zukuri style. They were renovated in the early Meiji period. Many carvings such as "niju-shi kou" (the twenty-four filial exemplars) are made on ranma (transoms)

Proper manner of praying at the shrine